After observing the need of the people, Samsung has developed the new concept of design for their upcoming device Samsung Galaxy S6. They want to show the real future with the help of their design concept of S6. 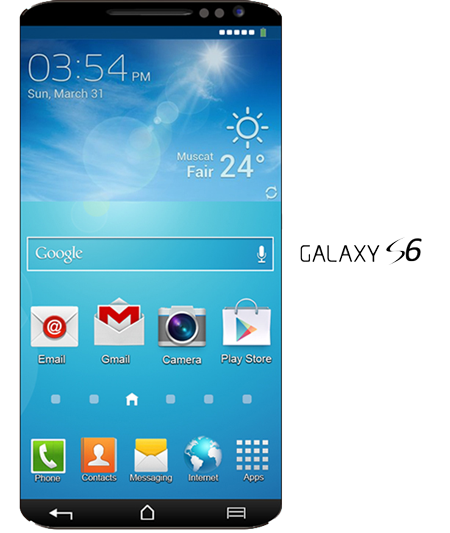 This time specifications will not be the most important thing in this case but we need to appreciate the bringing of imagination into a design. Appreciation is must for the new design and innovation for the future coming device.

Now you all must be thinking that you have not got any official news related to Samsung Galaxy S5. Then why we are talking about the device which will be available after it in 2015. Because galaxy S5 will be just a device with upgraded specification, not much innovation will be seen with this device. But Samsung is promising to launch Galaxy S6 with flexible display.

Create the render of a device that is so far in the future and it is not an easy task to give shape to the imagination in the world of technology today. However, Apple Conspiracy team has done a fabulous job. According to this concept, the Galaxy S6 has a plastic unibody with a new nano protective coating called hyperskin. Moreover, it will come with Android 6.0 (unnamed so far) with a beautiful interface GravityUX.

Entering a little on the hardware, the Galaxy S6 incorporate flexible display screen 4.7 inches and an impressive 2Kresolution (2048 x 1536 pixels), and its primary 18 MP will be capable of recording 4K resolution at high frame rate. As if this were not enough, according to the concept, the future flagship include a battery that can last up to four days of heavy use on one charge, as happened with the long-standing but super loved. After hearing the battery backup, I remembered the Nokia 1100 with the same battery backup.

Needless to say that these are just guesses, dreams and desires of Samsung team. In this respect the creators of render said:

This concept includes technologies that we have yet to implement, but it is our only way of giving justice to the overused word “innovation” without it being just a marketing term. In our opinion, only in the next couple of years we could have real progress in this area. However, new models have to be launched in time intervals shorter and shorter, and justify their “innovation” to mask the real problems.

Hopefully in two years innovation is not only a marketing term for us to see in reality something to show these images. For now we have satisfied market with Galaxy S4 but we will surely come with new innovations tomorrow.

Karan is a passionate blogger who likes to write on technology news related to apps and gadgets. When he is not online, he likes to enjoy his life with friends and busy with them in making new plans and strategies.