Plans are being reviewed for New York cabs to contain tablet PCs for passengers. Proposed by Square, a mobile payment company based in San Francisco, the intention is the replace 50 of the television screens currently in many New York cabs with tablet computers. 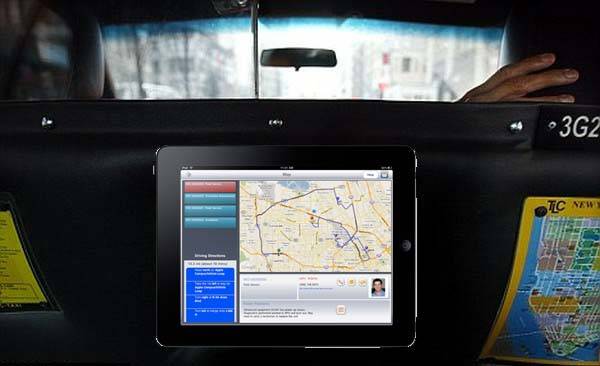 If given the green light by The New York City Taxi and Limousine Commission, riders will be allowed to play computer games and use apps during their journey. Reading any iPad, Nexus or PlayBook review indicates the plethora of different features now available on tablet PCs, and New Yorkers now face the mouth-watering prospect of utilising these at any point during their taxi trips.

Since WiFi or 3G is now available in most parts of the city, it would also mean the inside of the cab was wired up to the Internet – travellers could check their email or Facebook, search for restaurants and hotels, or check their bank accounts.

As the New York Times reported, “The commission is weighing a proposal by Square, a mobile payment company based in San Francisco, to replace Taxi TVs in 50 cabs with similarly shaped iPads or other tablets. If approved, the pilot program would allow riders to play computer games and swipe a credit card at any point in the trip.

David S. Yassky, the chairman of the Taxi and Limousine Commission, said Square’s technology would open up opportunities for a variety of content and computer applications, like the social network Foursquare, which allows members to note their locations, or games with taxi themes.”

Most usefully perhaps, they would also be able to use the tablets to pay for the journey, circumventing the need for card readers in cabs, reducing card fees and meaning fewer cabbies lose fares because of rejected cards. This is where Square hope to capitalise, allowing them to take a share of the lucrative cab payment market in New York.

Although the plans have been derided by critics as adding yet another unnecessary complication to daily life, their inclusion is testament to the pervading effect tablet PCs have had on the global market. Cab companies would not fork out on such technology if they didn’t see a clear benefit to their customers (and hence financial benefit to themselves). A tablet PC in a taxi could help a businessman keep on top of work as he rushes between meetings; a tourist travelling without his own smartphone could use the opportunity to keep in touch with friends at home; and a couple on a night out could check which films are showing or book a restaurant.

Square’s current 50-cab proposal is just a pilot, but its potential success could set a precedent for tablet penetration into more areas of our daily lives.

6 thoughts on “Plans for Tablet PCs in Taxis”