Yes, a few blogs and websites spoke about it, although somewhat unceremoniously. The new features which came with WordPress 3.6 would not, or at least have not, set the world ablaze. Although there were changes but those didn’t bother any well established author of any blog to any extent. 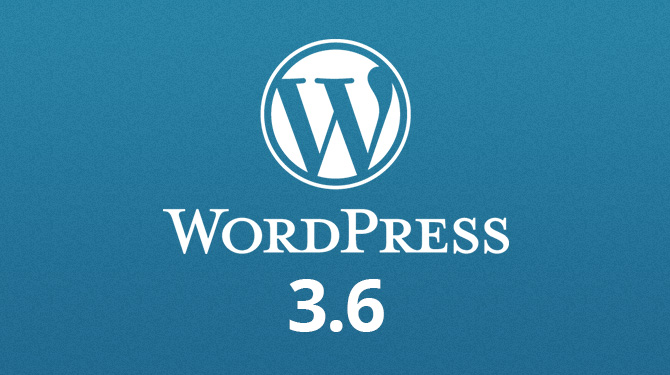 WordPress 3.6 wouldn’t be known for any pivotal change which it brought to the world of blogosphere but still you should mind. These new features are small steps towards a new direction and as WordPress is indispensable so you will soon have to adapt to these changes. Although there are no big visible effects today, the changes are waiting for you down the road and will soon surprise you with a bump.

The major changes which came in WordPress 3.6 were all noted in the release statement as well as several blogs covered them in details.

In WordPress 3.6 version, a new default theme called Twenty Thirteen has been introduced which is responsive design and a few major changes in post formats.

WordPress previously had the Autosave feature, the new Revisions feature allows you to compare between two different versions of the post so you can judge the best one easily. It helps in seeing which addition or removal can work most favourably for the post.

With better audio video support in the core, inserting a Podcast, a YouTube video or a MP3 is easier than ever. There is even a preview feature.

There are of course other changes but those features are not big enough to pay any notice presently. It would, however, do the developers good to get acquainted with the changes for accurate coding.

It is easy to see why the changes went away quietly. A beginner is yet to understand the implications and the experienced bloggers already have a premium theme installed and doesn’t care for the new default theme. If there is just one contributor to a blog, the Revisions feature becomes not so useful either.

Thus, an established blogger would not find WordPress 3.6 very useful although the update was long awaited. But when we look at the deeper meaning of these changes, we can see what WordPress is trying to tell us.

Theme Behind The Update

For the first time, WordPress introduced a default theme which is responsive. This clearly signifies that WordPress considers responsive websites to be the websites of future. This also removes the necessity of any plugin to make a site responsive.

Post revision feature, which we discussed earlier, is certainly targeted for better collaboration among writers and it also reduces the data loss issue due to technical failure or connectivity failure. It means, WordPress thinks people will write directly in the browsers than to compose it somewhere else and pasting it in the WordPress.

If you want new features which are drastically different, WordPress has a JetPack plugin which isn’t included in the original release. This plugin can add a few cool features in your WordPress. The core has not been touched and mostly it is the same which you had in previous releases such as 3.5.

If you are a blogger, however, you should consider these changes and what these changes mean to the blogosphere, the internet, the future of websites and to you personally. If you always wanted to integrate media in a better way or have a responsive blog for free of cost and hassle, these changes should be welcome for you.

WordPress is actually late to introduce these changes. Responsive web design, for example, is in use since 2011. Better media support has also been introduced by various browsers previously. Thus, if you don’t pay attention on these issues now, you might be further late on an already late issue. It would be wise only to take cue from these changes and move towards a safe direction.