Motorola step in Indian market, after around 3-4 year was a surprise for Motorola as well. The very first Budget Premium smartphone got a very good response from Indian market. Yeah, i am talking about Motorola Moto G. After Moto G, without any further delay Motorola launched Moto X and Moto E in indian Market. 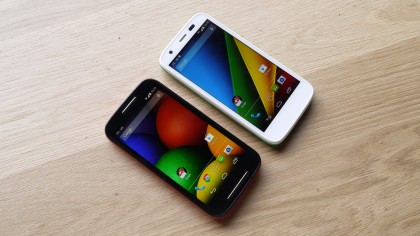 According to Price Moto G and Moto E, both comes under a low budget smartphone with high features. Let’s have a look what features made difference in price.

The Moto G has a quad core Qualcomm 400 processor with a clock speed of 1.2 GHz and the Moto E has a relatively slower dual core Qualcomm 200 processor with a speed of 1.2 GHz. On the memory side the Moto G has 16 GB of on-board storage with 1GB of RAM with no slot for storage expansion. Whereas Moto E has only 4 GB of on-board storage with 1GB RAM. The Moto E having less memory is logical as per its price point but there is an expansion slot for the memory of up to 32 GB by the help of micro SD card. On the graphics part the Moto G has the Adreno 305 processor clocked at 450 MHz and the Moto E features Adreno 302 processor of clock speed of 400 MHz.

When discussing about the display specifications the Moto G boasts of its 4.5 inches of IPS LCD screen with a HD resolution of 1280 x 720 pixels at 326 ppi. The cheaper Moto E has a display of 4.3 inches with relatively a lower resolution of 540 x 960 pixels at a lesser 256 ppi. Considering the price points of the two smartphones the display is very crisp and the color representation on both the displays are vibrant and excellent in their respective categories.

And now in the minor differences and similar features…

On the connectivity side both the smartphones are GPRS, EDGE, 3G (HSDPA 21.1 Mbps) Wifi 802.11 b/g/n, Assisted GPS with GLONASS, micro USB 2.0 and Bluetooth v 4.0 enabled. Both the devices support dual SIM cards.

The primary shooter on the Moto G is a 5 MPix with auto focus and LED flash, while the Moto E has a fixed focus 5 MPix camera. Absence of LED flash in Moto E may not be a good decision by Motorola, but that’s what we can expect in the price. Moto G’s camera supports face detection and Panorama. 720p videos can be recorded in the Moto G while Moto E can capture videos of 854 x 480 pixels only. The Moto G also sports a LED flash and a 1.3 MPix front facing camera for video calling unlike Moto E.

The Moto E has the basic sensors, i.e., Accelerometer, proximity and ambient light sensor. Moto G in addition to these also has magnetometer (compass) and Hall Effect sensor.

Finally comes the price point, the more powerful Moto G has a price tag of 13,999 INR whereas the Moto E comes at a price of 6999 INR only, half of the Moto G. Both the smartphones are aces and will be, as we hope, commercially super hit in their price segments. Both these smartphones have given a new brand image to Motorola and we expect the company to come up with more and more devices as these devices have scored a lot of eyes and attention of the market.

One thought on “Moto E vs Moto G”