Display of new Apple iPhone 5 is considered as the best display these days due to the advent of Retina Display technology. The reason why it is regarded best in the smartphones industry is that most of the top-notch brands including Samsung are finding the alternatives to match it. Recently, a study was conducted, which resulted into Samsung’s inability of finding the true alternative. 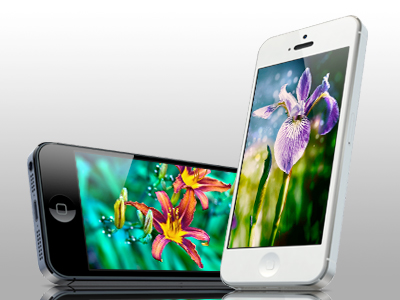 In the light of expert’s views, Samsung took aid of FMM (Fine Metal Mask) technology. In order to boost the resolution of the screen, which will push the pixels of AMOLED, Samsung employed the services of Fine Metal Mask technology.

While applying these technological skills, the manufacturers moved to the LITI technology (Laser Induced Thermal Imaging) which was considered the alternative to match the class and finishing of Retina Display. However, these all attempts still raised many questions that whether this alternative would match Retina? You will be amazed to know that the answer is No, because AMOLED’s biggest problem is the resolution weakness, which pushes it back from matching the Retina technology in Apple’s display.

From the above paragraph, we can deduce it quite easily that Retina technology is surely making its name as a benchmark in the field of smartphones display. What exactly the Retina Display is? Well, Retina Display is a brand promotional name, a trademark of Apple. Apple used this terminology for their LCDs (Liquid Crystal Displays). According to apple, these Retina Display devices have noticeably high pixel density that from naked eye and from a particular distance, human eye cannot notice with ease. Now by term pixel density means the measurement of screen resolutions in terms of small imaginary boxes.

Apple did not just use this term for their iPhone 5 model, instead this feature has been used in many other devices such as iPod Touch, iPad, MacBook Pro, etc. Now obviously the distance of viewing will be different, as it affects the quality of the image as well. Retina quality of the larger devices such as MacBook Pro is lesser then the smaller devices like iPhone 5. This claims that retina image quality is inversely related to the display size. All the widgets, which are present on the home screen and the main menu inside the interface, seem doubled in length and breadth, which aids the small pixels in Retina Display. Retina term is the registered trademark of Apple and it was approved in November 2012.

Several technicians, doctors, and scientists also presented criticism over the Retina Display. President of DMT (Display Mate Technologies) has challenged the Apple over their claim of pixilation. According to him, if the image has approximately 477 pixels per inch and the distance at which display screen is placed is 12-inches away from the naked eye, only then the physiology of human retina is satisfied. Only in this scenario, human eye will be able to see the pixilated image.

Phil Plait, an astronomer and well-known scientist also challenged the claim of Apple by presenting his view of 20/20 eye sight. According to him, if the eyesight of a human is 20/20, then at the distance of 12-inches, the pixels of iPhone 4S will be resolved and the picture will seem pixilated. These claims also carry some weightage but the makers of Apple technology have continuously rejected this sort of claim and portrayed their new Retina Display of iPhone 5 as the best for human eyesight.

In general, behind the success of iPhone 5, role of Retina Display is quite enormous, as it has attracted a larger pool of audience and provided competitive edge to the Apple.