In recent years, there seems to be a new smartphone developed nearly every five minutes. Some people may even imagine gangs of competing smartphones facing off in homage to West Side Story. 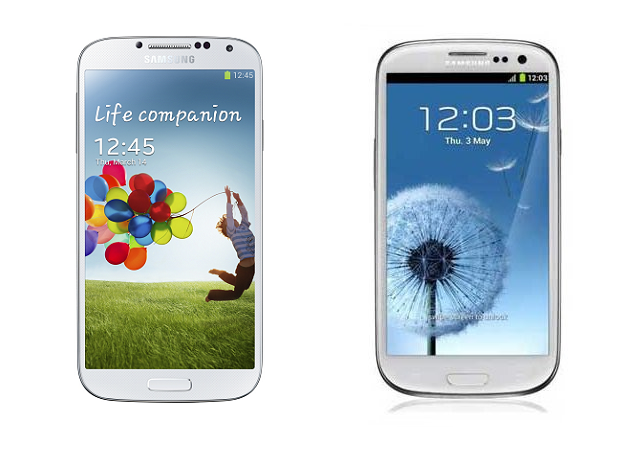 However, not all competing cell phones come from different brands. With companies continually improving their products, we often find ourselves comparing one generation to the other. Such is the case with Samsung Galaxy S3 and Galaxy S4.

There are many aspects about the S3 and the S4 that are similar. For instance, they both use the same operating system (Android – though S4 uses 4.2, while S3 uses 4.1), they have the same networks (3G, 4G, and Edge/2G), and they have the same carriers (AT&T, Sprint, T-Mobile, Cricket, Verizon, and US Cellular). They are also both very fast.

Perhaps the biggest appeal of the Galaxy S4 is the vibrant and clear resolution it offers. This is likely due to camera and screen improvements that the Galaxy S3 doesn’t have. For instance, the rear camera of the S4 boasts 13 megapixel (compared to 8 megapixel for the S3). The front camera is also better (the S4 boast 2 megapixel compared to 1.9 on the S3). Additional features include sound and shot as well as dual cameras.

As for the screen resolution, the S4 boasts 1920 x 1080 pixels, significantly more than the S3. This allows the newer version to deliver images in a truly HD fashion. The pixel density is also improved (441 for S4 versus 306 for the S3). Finally, the size of the screen is nearly two-tenths larger on the S4. These additions have led to the S4 being named the top smartphone by CNN.

Even with a larger screen, the S4 is actually a few ounces lighter than the S3. It also has a sleeker, more professional look and feel. The battery capacity is greater and additional thermometer sensors, an infrared blaster, humidity sensors, and overall faster system are all offered.

While the S4 offers some definite advantages over the S3, new doesn’t always mean better. To begin with, the sheer number of features offered by the S4 has some users feeling like it’s a bit too much – the potential of the phone can be seen as overwhelming. There has also been a problem with its storage availability. Because the software system takes up so much space, the actual amount of storage available for things like songs, photos, and videos is quite a bit less. This has become such as issue that Samsung has been working toward a solution.

One thought on “Key Differences between the S3 and S4”