Sony managed to sell the Xperia M in good numbers. It is a small dual core device and when it was launched, it was one of the best budget android devices you could buy. It was also offered with an optional dual SIM feature, a feature that many people primarily look for nowadays. Now Sony has come up with another device sharing the name with that device. 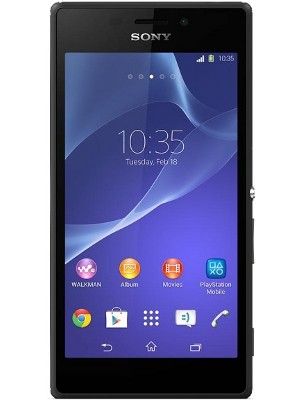 This new device is the Xperia M2. It also comes with an option of dual SIM. Not only is this device bigger than the previous device but it is powerful and better built as well. It comes with some new features and multimedia capabilities as well to keep you entertained. We take a look at what this new device is like.

This device shares its design scheme with the high end Sony devices like Xperia Z and Z1. In fact it looks like a scaled down Xperia Z1. The Xperia M came with a matte plastic back that felt a bit flimsy. This one comes with a glassy plastic back that is very smooth to touch. While the Z1 has got glass on the back, it comes with hard plastic. This not only helps save cost but also keeps the weight down. They have kept the device slim at just 8.6 mm.

On the right of the device is the micro SD and SIM card slot. These slots are covered by a flap. You will find the micro USB slot on the right side. There is no flap on the USB port as the device isn’t waterproof. The familiar large circular power key stays. Sony calls this design scheme the ‘Omni Balance’ design which is not much more than just a name. Overall the built quality is pretty good and the dimensions make it easy to handle.

This device has got a 4.8 inch display with qHD resolution. While we loved the size of the display, we can’t really say the same about its resolution. This low resolution gives it a pixel density of just 230 pixels per inch which just isn’t acceptable for a mid-range device that came out in 2014. It would have been okay back in 2010 or if this was a low price device but not on this device. Small text looks hazy on the display and you would have to zoom in most of the times to read such text. Most of the rivals offer semi HD displays now or at least stick to a size that would make this resolution look decent.

Okay we might have made it look too bad here. The display isn’t as bad as the numbers suggest. They have calibrated the colors very well and they look close to real. The saturation is just perfect as well. The brightness is good and surprisingly the blacks are decent as well. Overall it is a display you can live with if you are not used to a higher display resolution.

The device runs a pretty popular Qualcomm Snapdragon 400 chipset. The quad core processor runs at a clock speed of 1.2 GHz. The graphics are taken care of by an Adreno 305 GPU. It comes with 1 GB of RAM and 8 GB of on-board storage. This is the same basic hardware that runs in the Moto G, a popular device that happens to come with an attractive price tag.

The Xperia M2 can house a micro SD card up to 32 GB. It comes with support for HSDPA with download speeds up to 21 Mbps. NFC is available as an option on some of the models and so is the dual SIM feature. You get Wi-Fi 802.11 a/b/g/n and Bluetooth 4.0 for fast data transfers. You get the micro USB 2.0 port which supports USB on the go to connect external USB devices. This device is powered by a 2300 mAh battery that gives it superb battery life. You can thank the low display resolution now. It also comes with the Sony stamina mode that extends battery life when you need it.

The device has got a decent camera as well. The primary camera has a resolution of 8 megapixels. It gets some technical wizardry that we see on the Sony cameras and high end devices. It gets the Exmor light sensor which claims to improve image quality, especially when capturing in the dark. There is less noise in images that you click in dim light. It has got auto focus and touch focus which is pretty standard. There are other camera features like panorama and HDR as well. It has got a LED flash to shoot in the dark and the camera can record full HD videos at 30 fps. They have traded the stock camera app in favor of the Sony’s home brewed camera app which offers more functionality than the stock app. The front camera is a pretty basic VGA camera.

The device comes with Android 4.3 Jelly Bean which is an old version. But we aren’t worried because Sony has a habit of being a bit slow with the updates. They will come up with the update soon. The interface has been customized as you would have expected. Thankfully they have kept the changes minimal and the changes are not annoying. You get a good app launcher that is much better than the stock one. Various apps like gallery, camera and music player have been replaced in favor of Sony’s version. The Walkman player that you get is quite impressive with a nice interface and easy functionality. You get a free 30 day trial of Sony Music Unlimited and also some free movies on the device.

This is a nice device which can handle your everyday jobs with ease while having the potential of more. There is nothing very stunning about the device but there is nothing disappointing either. The only let-down here is the display resolution.  Otherwise this is a pretty good device.

Abhishek is interested in handset and technology reviews. Currently he is working with 91mobiles.