After a dry spell for a while, Micromax has added the Micromax Bolt A67 in its low-end smartphone portfolio. With the launch of this extremely affordable smartphone, Micromax seems to be stressing more on increasing its very successful Canvas series to higher extents. 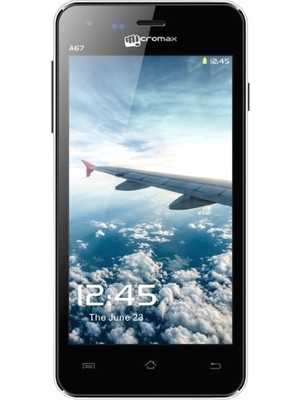 The device comes with a 4.5 inch screen, which is big enough for a budget phone, making the model absolutely fir for the pocket. In the following lines, we take a look at the entertainment package, Bolt A67.

The Bolt A67 does a decent job at looking good. It comes with a regular bar form factor, which isn’t much of a surprise though. The phone comes with a 4.5” capacitive touch screen LCD display, which packs a WVGA resolution of 480*800 pixels.

The phone is powered by a dual core 1GHz processor, which along with the 500MB of RAM that’s present on the device makes a good combination. It is fluid and smooth through most day to day applications like emails, whatsapp and other IM, stock Android apps etc.

The dual SIM dual core Bolt A67 handset sails on Android 4.0.1 aka Icecream Sandwich operating system, which, though is an older version, but is good enough for a low budget phone like this.

The Bolt A67 comes with a rather austere set of cameras that includes a 2MP fixed focus rear unit coupled with a 0.3MP VGA in the front, supplementing video calling and conferencing. As most budget phones, the Bolt A67 comes with an expected 4GB ROM which can be expanded up to 32GB via means of a micro SD card.

On the connectivity front, the phone comes with the regular dual SIM 2G connectivity, minus the 3G feature. The connectivity includes Wi-Fi, Bluetooth, micro USB and 3.5mm audio track. For entertainment on the go, there is the built-in FM radio receiver.

The phone comes with an 1850mAh battery and can be expected to run for at least 5 to 6 hours in normal usage mode. It promises up to 4 hours of talk time, which is decent enough for such a phone.

The Micromax Bolt A67 is available in colors ‘black’ and ‘white’, and offers quite a bit for a low asking price. So if you haven’t experienced a smartphone yet, and like to go light on the pocket, this could be your ideal buy.