Touchscreen technology has gone from strength to strength within a few years. Although the technology has been around since the 70’s, it has been too costly to manufacture on a commercial scale. 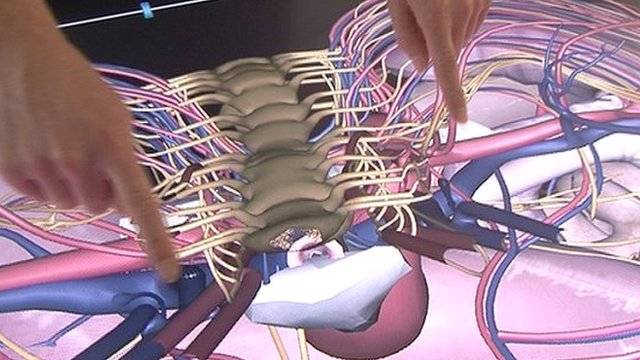 The largest attempt before it became mainstream was by Sega, the games console manufacturer back in the early 90’s. But again they found that manufacturing costs would not make it worthwhile and the project was shelved.

In 2004, Nintendo were the first to use the technology commercially via their DS console. Since then, the technology has found a place in various sectors, most notably in mobile devices. But US firm Anatomage has taken this to a whole new level in the field of medicine.

At St Mary’s Hospital in London, surgeon Aimee Di Marco has dissected a human body. But this involves no blood, and Di Marco is able to place the organs back in the body and reconstruct the bones and blood vessels. This is because the subject is not in fact human at all, but a full scale touchscreen, displaying a virtual example of a patient. It is intended to help prepare for real-life surgery and for the study of human anatomy, and at a cost of £60,000 British Pounds or close to $100,000, it is well worth the money.

The touchscreen is rectangular in shape, about the length of the average person and fully interactive. The ‘body’ can be examined at any cross-section, exposing the organs, tissue and blood vessel of interest. A zoom in function enables the user to enlarge any part they wish, to examine it in more detail.

The best part however is that the software can work with real patient data generated from CT scans of the body. The touchscreen has a USB port as well as other data transfer ports, which can download CT scans of a patient due for surgery. With a capacity of one terabyte, huge amounts of detailed data can be exhibited, enabling surgeons to examine the area and develop an idea of what to expect, better preparing them for the real thing.

One important use for this is in surgery relating to the kidney, an organ which doctors find difficulty in operating on because the blood vessels within the kidneys varies from person to person.

“We had a patient with kidney cancer and we took the software to theatre. Previously the urologist would have just had the standard pre-operative 2D image but this showed them the whole kidney,” explained Di Marco.

She added “If you can only see data a slice at a time it is more challenging and you have to create a 3D image in your mind. With this software it creates a 3D picture so when you go in you know what to expect.” Just like 3D printers, this technology creates a real life manifestation of computerized scans and images.

A further use for this ability to pre-examine a patient is with keyhole surgery. When looking at the monitors displaying the camera view, surgeons will have a better idea of what they are looking for and the details of what they are examining.

Medical students will greatly benefit from this technology. Students usually study from recently deceased bodies which have been donated to them. However once the body has been dissected, it is often no longer used. Although it is sometimes better to practise with the real thing, this technology can provide a high level of detail, in a faster, cleaner and more intricate way.

The future of this technology is ripe with possibility. For instance, the developers hope the technology can be incorporated with robotic surgery, enabling surgeons to operate from anywhere in the world, without actually having to be in the operating theatre.