The technology of video conferencing -long the domain of science fiction movies from the 1960’s onwards — has become a daily reality in today’s world thanks to VOIP systems like Skype, Vonage and other purely web based platforms like GoToMeeting. 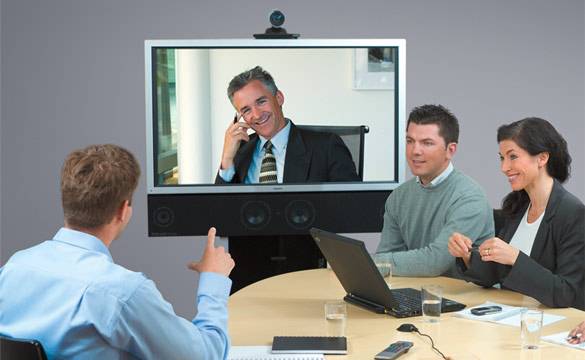 Video conferencing technology is improving on an annual basis and this is happening in tandem with steady improvements in bandwidth allowances, streaming video rendering and wireless connectivity. These accessory technologies are vital to the continuous growth of Video conferencing and its future developments.

At the current time, video chat is overwhelmingly being used for private communications amongst friends, family and relatives over the internet. Business use is also very widespread but usually reserved for less important situations unless an ultra-high speed broadband connection can be guaranteed.  Furthermore, as more and more mobile devices like tablets, smart phones and lap tops have VOIP and video chat applications built into them, and as more people use devices of the same technological quality, we’re seeing a constant rise in video chat sessions being done between friends and family instead of classic phone calls.

In addition to a multitude of downloadable applications software for video conferencing, there are also a number of web based platforms being developed. One notable example is GotoMeeting, which allows users to subscribe to video meeting capacity as an almost completely website based service.

The above are just the currently common uses of this powerful emerging video communication technology. Many more and of a much more advanced and important nature are still waiting around the corner or just barely being developed at the moment. Already, numerous trials are being conducted in areas such as the medical field and the criminal justice system. In the case of medicine, videoconferencing is being slowly introduced as a medium through which doctors and distant specialists can give opinions, expertise and even diagnose or recommend treatment solutions strictly through video sessions. One recent experiment conducted jointly by the Boone County Jail and Columbia Municipal Court in Boone County, Missouri illustrates another use for video conferencing; the court hearings of offenders were conducted with the defendants’ participation through streaming video chat instead of a personal visit. The project was soon scrapped due to video quality and transmission problems, but the fact that it was tried at all illustrates how the push in a video chat intensive future is underway.

Other future uses of video conferencing include military planning sessions, public debates amongst politicians and political conferences amongst world leaders. All of these are already being conducted, but the scale and scope will eventually increase dramatically.

It’s not just the user-end aspects of video conferencing that are going to see heavy expansion; hardware and software are changing and improving too. In the near future it will almost certainly be possible to create video display units that seamlessly and unobtrusively cover an entire wall or are meshed with a CEO’s work desk. Soon enough we may even see the advanced development of 3D conferencing technology that allows collaboration based on three-dimensional object and product designs

Numerous major tech players have clued into the enormous potential of telepresence services and products. Companies like Hewlett Packard, Cisco and Life Size Communications Inc, amongst others, have all been busy developing technology solutions for ultra HD video conferencing, full scale integration into home, office and mobile work spaces, and into creating the new data collaboration tools that will inevitably have to go along with any widespread workable use of video conferencing.

These same companies and others are also working intensely on seamlessly combining IM, voice, data exchange and clear video technologies into a single multimedia communications experience that can be used by professionals under even the most demanding reliability requirements in almost any occupation.

The Technology Issues of Video Conferencing

Most of the basic technologies for fully fleshed out video conferencing already exist. Integration of visual displays into wall, table and other office features is already at a commercial state of development while communications security through video chat on the web is also extremely robust and unlikely to be broken if applied correctly. In fact, videoconferencing security technology, with its multi-bit encryption systems for communications, is probably one of the most developed aspects of the field.

Furthermore, HD video capacity and the kinds of codecs and cameras that can handle high resolution communications displays are also already available on the market.

The single biggest problem still faced by video conferencing is bandwidth limitation. The raw data load of real-time HD video alone is very high and gets larger still when the on the fly information sharing and the document or image transfer are considered. These are obligatory for important meetings and need to be addressed. For the moment, numerous advances in video chat and meetings exist without a means of cheaply bringing them into the mainstream. Large corporate, government and institutional bodies may be able to make use of the latest in high bandwidth for totally smooth video meetings, but smaller businesses and private individuals are still stuck with often rough video that negates use in serious applications.

Once internet connectivity improves, and even more so once wireless data transmission capacity grows, then we’ll see a retail explosion in video that dwarfs even what’s already being seen. This technology is going to change communications and business collaboration in some extraordinarily efficient ways.