The media most used by audiences as a source of information illustrates the technological zeitgeist of the time. Just as many citizens religiously read newspapers during World War I, they followed the development of World War II on the radio, clinging onto rousing presidential speeches and reports from the front line. A few generations later, Americans were glued to their television screens and news channels as the headlines of the 9/11 attacks developed. Just 11 years later, it’s unlikely that we’d come to the news the same way. Social media has become the radio, television and newspapers of today. 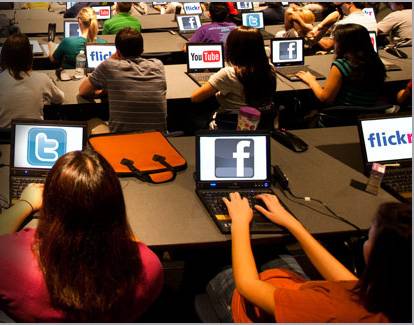 Whitney Houston’s death was reported on Twitter about half an hour before an official statement was announced, or news agencies could create a press release; many remember learning of Steve Jobs’ death whilst sitting at their MacBook or iPad. One case that recently proved the power of social networks was the appointment of Heins Thorstn as the new CEO of RIM. This news, despite not having been published on the official social networks of the company or in newspapers, spread through social networks to such an extent that it resulted in a fluctuation in the price of the shares of the Canadian company.

The zeitgeist has changed: in the digital age, news is not born in the news agencies but in networks of the people themselves. Whether it’s a simple 140-character phrase, or a story that won’t disappear from the top of our Facebook news feed, social media is now the driving force in the propagation of news stories. We may end up reading mainstream media, but this is rarely the starting point; often, we form the complete picture through snippets of social media alone.

This new system of news circulation is causing concern in the newsroom; after all, they make money through people reading their news. The BBC has announced a new manual for its journalists, reporters and producers, who are required to submit their news through official channels first of all, rather than one of the social networks. Similarly, Sky News is trying to reduce the number of advance bulletins that its journalists launch on Twitter, and also has banned tweets from sources outside the agency being re-tweeted. An email to staff read, “So, to reiterate, don’t tweet when it’s not a story to which you have been assigned or a beat which you work… Do not retweet information posted by other journalists or people on Twitter. Such information could be wrong and has not been through the Sky News editorial process.”

In an interview with The Guardian, Chris Hamilton, social media editor of the BBC, reiterated the value provided by Twitter and other social networks, not only as a platform to attract audiences, but also to compile news. However, he also pointed out its limitations. “Being quick off the mark with breaking news is essential to [our] mission. But we’ve been clear that our first priority remains ensuring that important information reaches BBC colleagues, and thus all or audiences, as quickly as possible – and certainly not after it reaches Twitter.”

However, these efforts indicate that the old-fashioned news networks are doing their best to cling onto their former power, knowing that sooner or later it is going to slip through their fingers altogether. Just as a few years ago newspapers had to cope with the transition to online news sites, now the trend has changed again. Increasingly, it is the iPad or BlackBerry PlayBook reviewing news stories via their integrated social media feeds, and users are able to compile information from a variety of sources to verify the content of what it says. As history shows us, the zeitgeist will change again in a few years; if traditional news rooms are to survive, they must adapt to this rather than try to avoid it.