So the news is out. Samsung has finally revealed its all new Samsung Galaxy S4. It brings a fast hardware, improved camera along with a big full HD screen. It has got everything that it takes to be the best smartphone ever introduced in the planet. Due to its polycarbonate body it seems quite similar to Galaxy S3, however the difference lies in the hardware and features. In terms of design the device is quite sturdy. 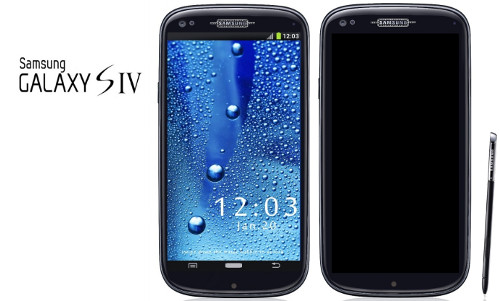 It has got metallic banding along its sides, which makes it looks quite classy. Galaxy S4 is going to be available in two colors, i.e., “Black Mist” and “White Frost”. It has got a superb Super AMOLED screen which is capable of playing full HD videos.  If you didn’t like the plastic feel of S3, then you will definately like S4. The “Home” as well as “Menu” and “Back” buttons on the device are almost of the same size as their predecessor.

Even though it’s not the first Full HD screen smartphone in the market, still the sharpness of the display of this device is quite impressive. The color saturation of the screen will provide you with some jaw dropping videos and images. The superb 441 ppi pixel density of Galaxy S4 is comparable to HTC One. Samsung has not really made major changes in the Touchwiz overlay for this phone, however it has added some brilliant upgrades that point out to the innovation. The whole process of interface has been simplified and it has become much easy to swipe. There are still a lot of widgets on the phone to play with.

Samsung Galaxy S4 is the first octo-core device which is powered by a 1.6 GHz Exynos 5 CPU running on 2 GB RAM. Another great feature of the device is Smart Stay. It senses your eye movement and tells if you are looking at the screen or not. If you remove your eyes from the screen the video will pause and will resume playing once you look at the device again. Galaxy S4 will run on Android Jelly Bean version 4.2.2. The notification bar on the phone will allows you easy access to profiles, new messages and calls as well as various connectivity options.

Lastly, as there is already a lot of buzz about this latest device by Samsung, a lot of mobile phone network service provider will roll out some really good Samsung Galaxy S4 contract deals in order to lure customers. You must keep a watch on these deals as they may save you a lot of money.

2 thoughts on “Samsung Galaxy S4 – Is It The Best Smartphone Ever Introduced?”