It’s never been any secret that Apple and Samsung do not see eye to eye on things. The two tech giants have engaged in a spirited competition for some time now, especially since the launch of the latter’s Galaxy S series smartphones. The two companies have gone head to head in the courts over patent wars as well. 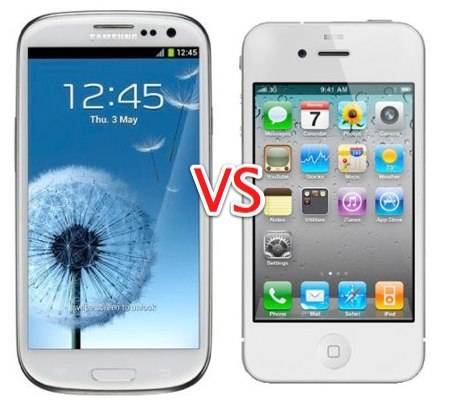 However, as the Samsung Galaxy S III has just seen release for all of the carriers who supply the iPhone 4S, it is necessary to compare the two devices to determine which one is right for you.

One of the most important aspects of a smartphone is the battery life. While the iPhone 4S has had its problems with a defect in this area, an update by Apple several months prior has apparently cleared this up. With reasonable usage of the device, a user should be able to get at least a full day’s worth without having to charge during the day. The Samsung Galaxy S III, however, is another story. Like all Android phones, it is nearly impossible to get through a few hours of usage without having to charge the battery.

If operating system of great concern to you, you will know right off the bat which of these two smartphones is better for you. The iPhone 4S comes with iOS 5 right out of the box. Apple’s mobile operating system has always been very straight forward and easy to use. It is also a closed system, which means that any customization of your phone will be limited. The iPhone 4S will also be getting an upgrade to iOS 6 when it becomes available in the fall. On the flip side, the Galaxy S III includes the Android 4.0 Ice Cream Sandwich operating system, which has been long awaited by eager Android fans. In spite of this, 4.1 Jelly Bean has just been announced and is expected to appear on future phones. Unfortunately, there is no guarantee that current phones will get an upgrade once in the hands of consumers.

In terms of form factor, the iPhone 4S is identical to the iPhone 4 before it. It fits comfortably in the hand and has the customary 3.5 inch screen that has appeared on every generation of Apple’s smartphone thus far. With the Retina display the iPhone 4 includes, screen resolution is 960 by 640 pixels, which makes it crystal clear. The Galaxy S III is considerably larger and may feel too big in the hands of certain users. This is so as to support the huge 4.8 inch screen that boasts a resolution of 1280 by 720 pixels.

The one area where both phones are equal is the camera. They each sport rear-facing main cameras that are 8 megapixels with video capture resolution of 1080 pixels. If this feature is the biggest deciding factor in which phone you want, it is a stalemate.

Connectivity speeds are of utmost importance to many smartphone users. While the iPhone 4S only connects to 3G data speeds, the Samsung Galaxy S III is 4G capable, making it a bit faster. Both devices are Wi-Fi capable and offer mobile hotspot tethering.

The Galaxy S III can sport up to 48GB of storage via internal and microSD card. However, while the iPhone 4S doesn’t support microSD storage, you can opt for one that includes 64GB of internal memory. In the end, when choosing between the iPhone 4S and Samsung Galaxy S III, it all comes down to what you deem as most important in your smartphone. If battery life is most important, you should go with Apple, but if you prefer a huge screen that offers incredible clarity, you can’t go wrong with the Galaxy S III.