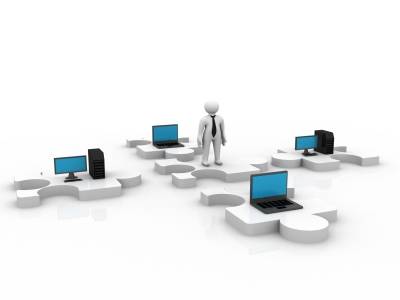 The concept of virtualization generally refers to the formation or creation of a virtual (rather than a tangible) version of an item.  The actual item could refer to several different objects, such as (but surely not limited to) computer operating systems, a system of computer servers, some form of storage device, network resources, as well as many more.  You might have already partaken in a type of virtualization and might already know a fair amount about it if you have ever gotten to the opportunity to configure a computer hard drive or separate it into various partitions or section. Check out this video (on YouTube) for a simplified illustration of virtualization.

A hard drive partition could be thought of as a “logical” device, or as a virtual device, that can function as a separate disk drive in your computer system.  This fits perfectly with the above definition of virtualization, because of a tangible, physical hard drive, several are constructed virtually that do not exist technically in the physical world, yet are fully functional as the device they are representing.

And so, What is Virtualization?  If you’re still a bit confused, there is another potential example that might help to clarify the situation even further.  There is additionally a process known by the term operating system virtualization that entails the usage of application software that is specially built to allow a certain piece of hardware to operate multiple operating system occurrences on the very same computer at the very same time.   This type of technology has existed for a decent amount time as it previously was used to allow mainframe operators the ability to make efficient use of internal processing power.

As a employee of Dell, I'm engaged with the latest technologies daily. Many people, including large companies and private organizations, aren't aware of the available tech solutions that can make their operations more efficient.