Most of the users often talk about different features or apps in any particular smartphones or about their brands. However, they are not much aware about the various operating systems, which run these mobile devices. Knowing different mobile operating system is as important as talking about the brands and features of these phones. 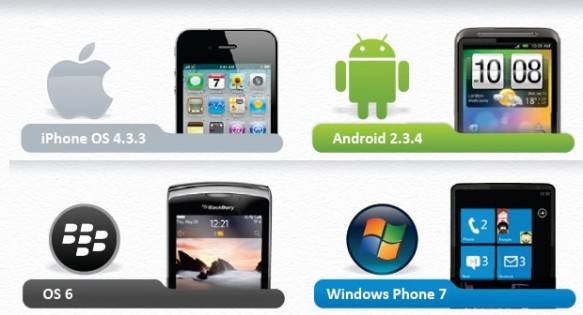 This will help you in getting a right mobile OS based phones, which are smooth in functions and features. So, let’s explore some of the top mobile operating systems and its top known mobile apps in the following paragraphs.

When you talk about mobile OS, Android comes first, which was released by Google in the year 2008 on 20th September. You could see a number of smartphones based on this mobile OS. Let’s check some popular mobile applications for Android operating system.

Browsing and posting over different forums is often a painful thing over smartphones. The Tapatalk Forum application is designed to make these things simple and smooth to access different forums. This application makes you quicker that you access it through any standard mobile browser. You can easily access things like your favorites, remain updated with your threads through simple interface. It helps in organizing the different forums by categories. You can also search for a number of available forum features. The Tapatalk Forum App is supported by countless popular forums and comes at a cost of 3 dollars.

In the age of skyrocketing fuel prices, this application comes as a money saver tool for you. It helps you in finding out the cheap gas for you thus help in saving your hard earned money. Whether you remain in US or Canada, it helps you in finding the list of gas stations in your vicinity area highlighting the cost as well. All you need to do is to select the cheapest one and save money. GasBuddy relies over an active user community, where people earn points by simply reporting the current gas prices. These points could help you in winning prizes like getting free gas for your car.

Apple came with its own operating system – iOS for its different mobile devices like iPhone and iPad, which was launched on 29th June in 2007. Since then a number of iOS upgrades are found in the market, with the latest iOS6 is seen coming in the market. Let’s check some of the best apps for iOS based mobile devices.

This application is for iPhone, iPad and iPod touch, which comes for around 1 dollar. Clear is basically a task management application but when you compare it with other similar apps, it seems to be more user friendly and seen with more beautiful design. The latest version of Clear is compatible with iCloud, which helps you in sharing your task lists between your iPhone and MacBook without any hassle. The other vital features are the ability switch over the lists in no time along with pasting the text into this app and having all the stuff in auto format in the list.

This application is for iPhone, iPad and iPod touch, which comes for free. It helps in locating different videos over your social networking contacts along with searching and giving you a curated directory. It is backed with a vibrant community and a clever application messaging system, which makes it stand out in the list of similar apps.

This operating system was basically designed focusing the business. Now, you could find some additional enhancements in this OS for complete multimedia support. The BlackBerry app World has more than 50,000 downloadable tools and applications. Let’s check some of the apps for this OS.

It helps in transforming your mobile device into a unique and sleek timepiece, which displays the time at the static text grid. Though it comes for free, but its paid version has several other vital features including numerous cool color themes, different option for date, and alarm display with different features. WordClock not only gives you the time but at the same time opens for you a philosophical can of worms wherein you could see them in numbers when they are actually words.

This is basically a very handy screen capture application, which helps you in capturing and sharing different songs and music piece over your Facebook status or tweets, which you have just read. ZonaSnap is integrated with Facebook, BBM, Photobucket, Twitter and email. Using this application, you simply enter into the complete retro interface by all means through your BlackBerry phone.

This is a newer mobile OS as compared to the above discussed operating systems. This OS is seen with an entirely new and revamped user interface, which is inspired by Metro Design Language of Microsoft. It incorporates a complete integration of Microsoft services like Xbox Video, Xbox Live games, Xbox Music, Bing, Microsoft SkyDrive and Office along with integrating several non Microsoft services (Facebook and Google accounts). Let’s check some of its best apps.

It is basically the best Google Reader companion for your Windows based phones. It carries a clean and neat interface that matches with the design of Microsoft along with giving you a good support for things like Live Tiles. You can star the important articles along with sharing and reading them via the tools Instapaper, Google Docs, or even the Readability mobilizer views. It is simple in looks and use, but at the very same time it is a very smart RSS reader.

The windows based phones have one official Foursquare application, however, this application simplifies your user experience in a very big way and with robust effects. 4th and Mayor comes for free and supports all the features, which you find in Foursquare. These include the notifications and Live Tiles for a number of check-ins and carried out in a very clean and simple method, which accommodates in the style of Windows 8 Phones.

The applications make and mar any mobile device. Any mobile OS becomes popular only when you see loads of its apps and features being developed by the brands. The above are few of the popular mobile operating systems with their top applications.