Information kiosks have come a long way from the early days of “hole in the wall” ATM machines. Early kiosk ATM’s were called holes in the wall because the kiosks were essentially small computers with green screens and physical keyboards that were attached to the side of a bank. They were large devices inside the walls of the bank, behind the user interface, because they were essentially computers that had an exposed keyboard, a credit card scanner, and a cash dispenser. Part of the reason they were located on the sides of banks was due to security and maintenance issues. 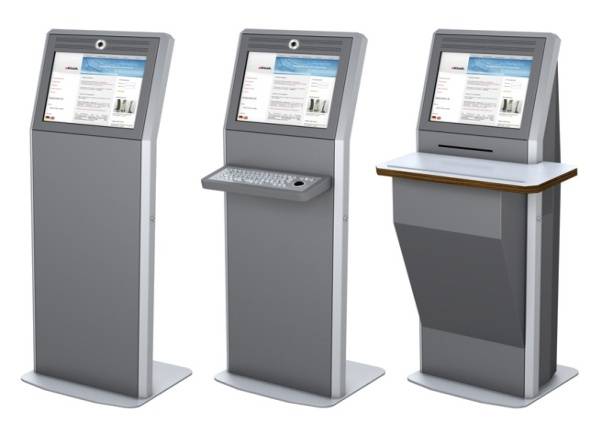 Since that time, kiosks have shrunk significantly in size. Essentially a kiosk computer does not need to be any larger than an iPad. No longer do you have to have a physical connection to a central server or large computer processor on the back end. Stand alone kiosks can communicate through secure wireless connections with the backend servers that do not have to be located in the near vicinity but could be in a different state, or even a different country.

Security has also improved since the early days of the first ATMs. Software security is much better than it used to be, but so is physical security. The physical housing of ATMs comes in various sizes and styles, based on your specific needs. Most secure kiosks utilize different layers of glass screens for their interfaces to prevent malicious users from breaking in and compromising the device.

When considering the various advancements and new applications for kiosks today, one cannot emphasize too strongly the importance of advancement in touch screen technology. Touch screens are not only more secure than they once were, they are also more durable. There are a handful of different kinds of industrial touch screen technologies from infrared sensor lasers for the most secure applications to touch sensitive interfaces for complex interactions or small screens that require high rates of pen point accuracy. The introduction of software based touch pad keyboards that take the place of the old physical keyboard interfaces has also greatly increased the application possibilities of kiosks.

Beside automatic teller machines, kiosk applications in retail stores have been on the rise in the past few years. Grocery stores in particular have made use of kiosks through self service checkout lanes. Retailers like book sellers have introduced kiosks for accessing their store inventories. Many of these inventory kiosks will even allow the user to see their online inventory and order their items right from the kiosk in the store. This has been a great way to increase sales as the customer can make the purchase immediately without having to be told to go home and make the purchase. Often, once the customer has left the store, the opportunity for a sale leaves with them.

Government institutions have made great use of kiosk applications in the past few years as well. The department of motor vehicles is notorious for having inefficient service and long waits. Now, many DMV offices are using kiosks to take care of simple tasks such as renewing license plate stickers.

Employers have also made use of new kiosk technologies to improve the efficiency and productivity of their employees, and to recruit new employees. Many large employers such as grocery stores and big box retail stores have kiosks that will allow potential employees to fill out their applications and schedule interview appointments from kiosks. New time clocks hosted with kiosk application technology is also becoming prevalent in the work place. HR training sessions as well can now be hosted on a local kiosk application.