One of the biggest new features of the iPhone 4S has been the iCloud support, which includes cloud support for iTunes. With this you can download music from iTunes to all of your iOS devices, and also get access to music that you have previously purchased from iTunes on any of your iOS devices. So if you have bought an album on your home computer, you can then download and listen to this through your iPhone on a long train journey. 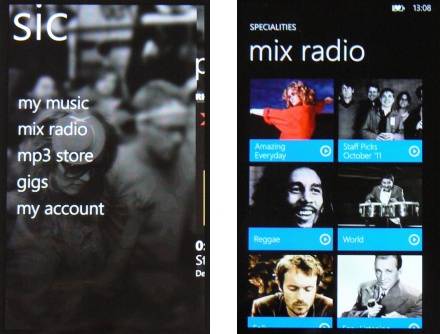 Internet music is the future, and online services such as Spotify and Last.fm are quickly replacing mp3s and making them seem as old hat as audio cassettes. But so far, streaming internet music has not really taken off on smartphones in the same way as streaming video services like YouTube.

Other phone manufacturers are also keen to release their own internet music services, and the latest of these is Nokia with the new Lumia 800 Windows Phone. The Lumia comes with access to Nokia Mix Radio where you can listen to thousands of artists and songs. The service is completely free and doesn’t even require you to subscribe.

You can create playlists of your favourite artists or genres, and also be suggested new music based on your listening habits. When creating a playlist, you can choose to download the music to listen to offline, which can be great news if you find yourself on a long train journey without an internet connection.

Nokia Mix Radio is just one of the many great features to come from the partnership between Nokia and Microsoft. The Lumia is a fantastic phone for entertainment with Zune, Xbox LIVE and now Mix Radio, all providing you with plenty of ways to stay entertained.

With internet music streaming services like Mix Radio, the amount of storage space on a smartphone is becoming largely irrelevant. One criticism of the Lumia and other Windows Phones is that they come with a limited 16GB of storage with no option to expand via microSD, but with Mix Radio this does not matter.

You can listen to all of the music you want while you have an internet connection, and download up to 14 hours worth of music to listen to offline. Unlike the similar iTunes service on the iPhone, Nokia Mix Radio is completely free. There is no monthly subscription, and you do not need to pay for each song listened to.