Instagram is a photo editing and sharing tool and  social networking site that got underway in October 2010. The app allows users to click photos, apply digital filters to them, and subsequently share those pictures with other users to whom they are connected to on that social network, in addition to other social media networks like Facebook, Twitter and so on. In two years time Instagram had 100 million users. A unique feature of Instagram is that it limits photos to being square, like Kodak Instamatic and Polaroid photos; and do not use the rectangular shape which is what you get with mobile phone and tablet cameras. 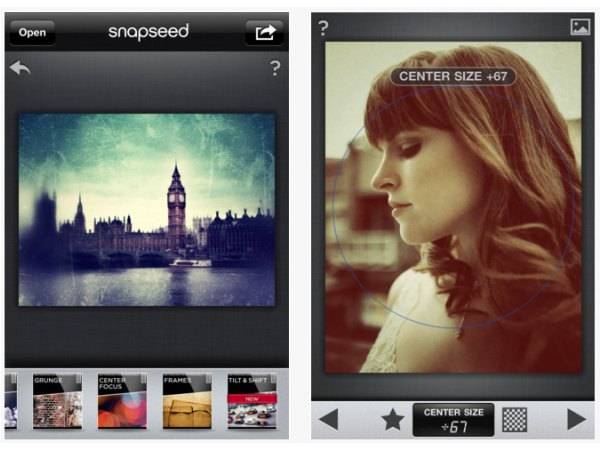 Instagram was in the beginning supported only on iOS devices, but the developers added support for Android mobile devices (with camera of course) that run Froyo version 2.2 (minimum), from April this year. It is made available through the iTunes Store and Google Play Store. Facebook  acquired Instagram for something like $1 billion in April earlier this year.

Nik Software’s robust photo editing software, Snapseed, allows you to alter your photos thru uncomplicated gesture controls, and enables you to share your fresh worked pieces of art through social networking sites like Facebook, Twitter, or Google+. As of now, this app has over 9 million users.

One of the greatest features about Snapseed is its comparative ease of use. This app makes it exceptionally easy to modify some characteristics of your photos without having to wade across innumerable menus or enroll at a class. Most changes can be performed with a plain swipe, and you can undo any changes you make at any point in time.

Though the best editing experience is on a 7 or 10 inch screen, performing these actions on a smaller screen is not bad at all. In fact, Snapseed bagged Apple’s “iPad App Of The Year” award in 2011.

Now Google has purchased Nik Software, the company behind Snapseed, thus entering the arena for a punch up with Facebook and their runaway hit photo sharing app, Instagram. Google and Nik Software were pretty tight lipped as to the conditions and specifics of the deal.

Google’s Senior VP of Social, Vic Gundotra averred that they want to help users create photos that they would totally love. He also stated that he hoped that users would continue the Google journey.

The battle for the lion’s share of social network users now increasingly hinges on innovative and creative apps, like photo editing, for example. How far this strategy pays off, remain to be seen. As of now Google is far behind Facebook; if there is a sudden increase in the popularity of Snapseed, it will certainly augur well for Google + too.

George Webber is a Freelance writer for topics about Entertainment, Technology and the Internet.