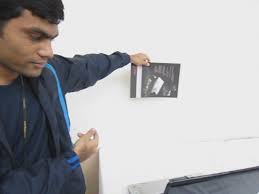 This Smartphone is comprised of special apps which help the blind to navigate through their daily lives easily. They no longer have to face obstacles of catching a bus, reading text which is in print and get acquainted with a new place. The new Smartphone takes into account all the common problems which the visually impaired face.

A new breakthrough like Georgie is making tasks easier for the blind. For the first time social networking sites like Twitter have become accessible to the blind. They can read and text messages easily. Shooting pictures with a camera has become easy. In some cases visually impaired have found to be capturing pictures of sunsets and old buildings. They no longer have to depend on a host of devices to lead a comfortable life. This device which makes use of assistive technology has made their lives much easier. The Smartphone Georgie has been named after the couple’s Golden Labrador dog.

The Smartphone depends on Google’s Android operating system. The developer of the phone Roger-Wilson Hinds could send his first text through the Smartphone easily. He ensured that these digital experiences are made available to his friends with no sight across the globe. This led to the introduction of this highly functional Smartphone. A device like this has helped the blind to solve their everyday problems. After using this device blind users have become more confident about their lives. They have experienced a new freedom which could not be experienced earlier.

This is the first Smartphone which has been developed for the first time especially for the blind. The developers have created apps which are highly suitable for the blind. With strong customer support the Smartphone has received a huge positive response from the blind population. Georgie offers special features which include touch screens which are voice assisted, managing contacts have become easier and text messages can be sent with the help of voice inputs. With the help of the navigation apps users can identify hazards which fall on their way such as low hanging branches.

Georgie can be one of the ideal gifts for visually impaired people. The phone has apps which can be classified into travel, lifestyle and communication. If a blind person visits a new destination it is no longer for him to locate the places of interest. He can easily find the local cafes and bus stops easily. It has become easier for him to find out when the next bus is arriving and when to get off at a bus stop. Getting weather forecasts for a particular area has become easier.  With a Smartphone like this the visually impaired can listen to audio books and identify color of objects.

With the help of assistance offered through the phone a user can call a helper to find out where he is actually. Sound clips can be added to images so that they can be placed easily later. His new technique which is included in this phone is known as audio tagging. A photo can turned into a text document which is easier to read. With the help of camera assistance pictures of objects can be takes easily. The users will be told what object has been captured. The use of advanced technology has made this Smartphone an extremely user-friendly device for the blind.