Active games have been marketed as the perfect cure to the sedentary life styles kids are feared to be living. They were suppose to ease the parents worried minds over the stagnating child glued to the console. However, a study shows that these exergames have little or no difference on the activity levels of the kids who play them. A study by the American Association of Pediatrics shows exercise games are not improving kids health. As the sector of the exercise games has grown exponentially since its launch six years ago, doctors have found evidence against one of the most widespread belief that surrounds it; that exercise games are beneficial to kids health as they make them more active. 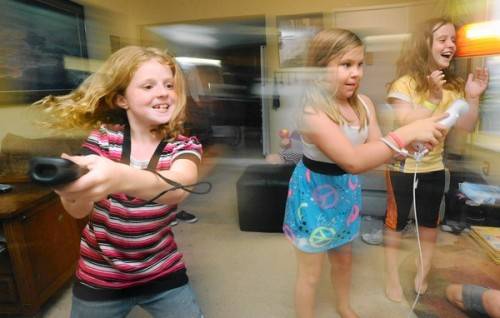 The sales of active console games have thrived in the last few years. Their appeal was largely built around the idea that they would help people, especially kids keep fit by keeping them active while playing, whilst also keeping them entertained. Now, doctors have disputed these claims and suggest that active games are no better for health than, say, racing games According to the lead author on the study, Scott G. Owens, an associate professor of exercise science at the University of Mississippi states that the active games do not increase levels of activity. The study saw a group of kids between the ages of 9-12 receive games, the other half receiving games that were more traditional “inactive” games  such as shooting games while the others were given active games. The kids playing active games showed small peaks in activity levels but over time they were at a level with the group that was playing inactive games. In effect the levels of activity remain the same as those studied who had been given the active games tended to be less active at other times of the day.

This, however was not the biggest issue as a bigger problem with the active games is the fact that people take them up and play for a couple of weeks but after six weeks or so their activity levels go down exponentially. Put simply, the novelty of the game wears off and once people stop playing every day their activity levels decrease to the same as before they started playing. Researches recommend that the best way to keep the activity balance right is that of good old live sports and if the lifestyle is active enough they see no harm in computer games of any sort.