First it was a pair of glasses, and now it’s a pair of shoes. Google has once again managed to breathe life into an everyday object by transforming a pair of Adidas sneakers into talking machines. The 2013 South by Southwest (SXSW) in Austin witnessed the unveiling of yet another inspired Google concept, the ‘talking shoes’. As part of its Art, Copy & Code project, the web search giant showcased a prototype of a shoe that is capable of interpreting movement data and converting it to spoken messages that can also be shared on Google Plus. 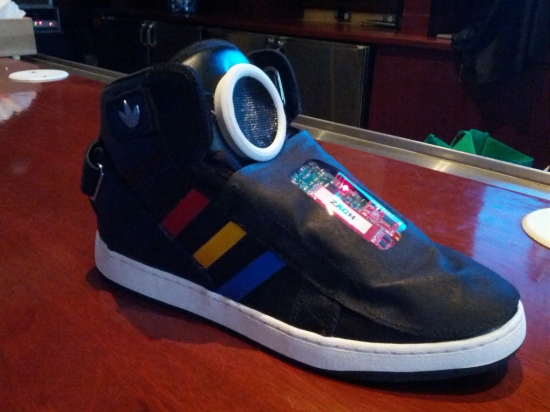 A basketball court and an obstacle course made a sports-based theme instantly evident on entering Google’s spacious SXSW headquarters located right opposite the Austin Convention Center. Visitors could put on the talking shoes at the Google Playground and take them for a spin around the grounds. A regular pair of Adidas high-top sneakers is transformed into a living, thinking character every time someone puts it on.

The Talking Shoe by Google

The tongue of the shoe houses a micro-controller with a round microphone above it. The shoe also has a gyroscope, an accelerometer and pressure sensors which it employs to detect movement and generate messages accordingly. The shoe has something to say about the physical activity or the lack of it to its wearer. It syncs with the wearer’s smartphone via Bluetooth and is capable of sharing the messages on the wearer’s Google Plus profile. Depending on the wearer, the shoe adopts a personality and motivates the wearer to get active and stop lazing about.

But Google’s ‘talking shoe’ isn’t just a shoe that can talk. Every pair has a personality of its own. While one pair may rejoice and praise you every time you engage in physical activity, another may egg you on as you dawdle about. A promo video released by Google showcases the shoe in action. When the wearer is loitering on a park bench, the shoe remarks, ‘This is boring’ but when the wearer gets active and starts playing basketball, the shoe quips, ‘Call 911, because you’re on fire’.

The ‘talking shoe’ can also be looked at as an addition to an increasing number of gadgets that seek to promote health and fitness. The shoe encourages users to adopt a healthier lifestyle by incorporating exercise into their daily routine. However, Google made it very clear that it has no plans whatsoever of entering the shoe making business or even of making this imaginative product available to the general public.

Google’s Advertising Arts Team headed by Aman Govil has developed this shoe with the purpose of inspiring developers and encouraging creativity. In fact, the Arts, Copy & Code project has been initiated with the aim of enhancing advertising by making everyday objects more interactive. With this in mind, Google has plans to perform such experiments with many other daily use objects. Govil said that in the coming days Google may work on an alarm clock that sends critical remarks to people if they press the snooze button more than three times.

Up until the showcasing of the ‘talking shoes’, the excitement at Google’s SXSW camp was all about its Glass Project. Another wearable computing device, Google Glass is worn like a normal pair of sunglasses except that it’s quite unlike one.

Google Glass has a tiny LCD screen situated on the upper right corner that is wirelessly connected to the user’s smartphone. It is capable of taking pictures, shooting videos and providing turn by turn navigational information through voice commands. Unlike Google’s talking shoes, Google Glass isn’t just a concept and will be available to consumers soon.

An internet enthusiast, Ryan Larkin writes about Social Media, SEO and the latest in Technology.