Google launched a version of the tool to meet people face strictly to the location of earthquake victims in Japan on Friday. 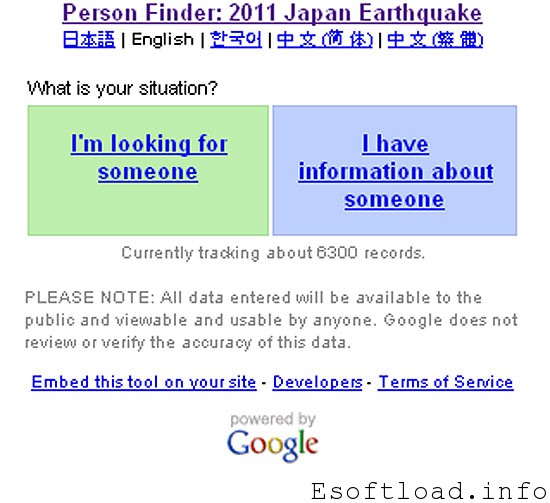 A strong tsunami, generated by a 8.9 magnitude earthquake killed at least 300 people and killed today in the country boats, cars and homes, causing several fires in still air affected. However, the number of victims should not stop growing, since the police reported that between 200 and 300 bodies were found in Sendai, on the northeast coast of the country, the city hardest hit by the quake.

The Google website functions as a message board and a directory, through which people can search for relatives and friends, and write notes in order to discover whether people are safe.

[ Vist To Find Someone With Google Tool ]

The service, which has proved useful in other major disasters, may be added to websites and social networking pages.

Many volunteers from various countries help in the composition of the database system for locating people of Google, whose initial use occurred during the earthquake of Haiti in January 2010. The tool was developed from work done after Hurricane Katrina, which devastated the city of New Orleans in 2005.