Felines have always been a mysterious lot. They are always secretive and are mostly quiet, not making a racket like dogs. Their ability to move silently like the stealthiest assassin and to survive falls that would otherwise be enough to kill any other living thing are pretty much supernatural. Another superpower that these animals happen to possess is their cuteness. 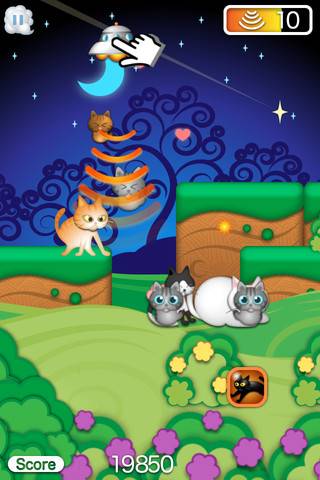 A small kitten meowing is probably the most irresistible thing that one can ever think of. As a matter of fact, in the app to be reviewed here, Cats Away, even aliens aren’t immune to these charms!

What is it about?

The story starts with two aliens who are best friends, spending their days happily drinking cups of tea together. In the scenery, there is a planet where the two look at the felines gathered there and remark on their cuteness. However, as they are lost in their reverie, they become witness to a huge supernova that threatens to tear the cat inhabiting planet apart. These noble aliens now decide to make it their mission to take out their spaceship and save as many of these cute animals as possible from endangered planets all over the galaxy. The real person behind the UFOs steering is of course the player, and this is where the gameplay comes in.

The gaming aspect of the app is extremely simple because all the player has to do is to use the space ship’s beam to drag up as many felines as possible. The player is taken to different levels, which are infested with these cute animals and he or she has to save as many animals as possible from a painful death within a time limit. This limit is usually set at around 60 seconds but this of course changes. It’s possible to increase the time available by making use of special cats that provide such a bonus.

Speaking of bonuses, there are special felines that the player can beam up, which will give the player a certain power up or buff that will make lifting others much easier. These power ups can range from increasing beam strength to increasing the shuttle speed, adding a nice flavor to the already rich game that is Cats Away.

In addition, there are also combos that the player can execute to achieve higher scores. Chaining lifts together becomes much more important later in the game when there is a much shorter time limit in which the player has to complete the level and there are much more felines to rush to safety. However, although it may make the game more challenging it also makes it more fun and rewarding as the player can aim to achieve the highest scoring combos possible.

As the player advances through the game, he or she gains points that can be used to get certain upgrades, and the most important ones have to be concerning the spaceship. The player can purchase new and more improved spaceships, which have different attributes that make them better. These upgrades can be ‘improved movement speed’ or a ‘larger beam area’ amongst many others. Making the upgrades can be very rewarding as the difficulty ramps up as the game progresses.

Although this app starts out rather slow in the beginning it quickly catches up in a spectacular fashion later on. The early levels are a little boring as the player is still being shown the ropes, and the gameplay isn’t kept at a high difficulty level. However, once the middle levels of the game start, the fun begins as the app becomes even more addictive and hard to put down. The reason for this has to be the fact that it’s an amazingly well designed time killer, and it does a great job of keeping the player engrossed. To say the least, it’s a lot of fun and getting bored anytime soon is out of the question.

The Visuals and Audio

The graphics are alright as far as app games go and what this title lacked in sharpness and detail it made up for with the sheer variety it offers. This is thanks to the numerous levels in the game where each has its own different planet and background. Although the surroundinges aren’t exactly impressive, the varying looks will serve to keep the player occupied.

Sounds are a strong point of the game, because as it’s a feline dominated game, the app is full of kitten sounds and meows all the time. This may be annoying to some, but it’s actually quite endearing and makes the game more attractive to play. Some sounds are so realistic that one actually thinks there’s a kitten sitting on the floor. All in all, both the textures and the audio don’t disappoint.

Cats Away is a very decent choice for anyone looking forward to wasting some time, and the cheap price of $0.99 means that almost anyone can this game.

2 thoughts on “Cats Away iOS Game: Saving Cuteness From Doom!”