For a while there it seemed as though BlackBerry was on the precipice of being forgotten completely.

Reporting a whopping $4.4 billion loss for the quarter ending in November of last year, the company has since done a 180. A new CEO, new products, and new partnerships have lifted company shares from $5.44 in December to nearly $11.00, and have some analysts believing the stock could rise another 50% in the coming months, according to CNBC. 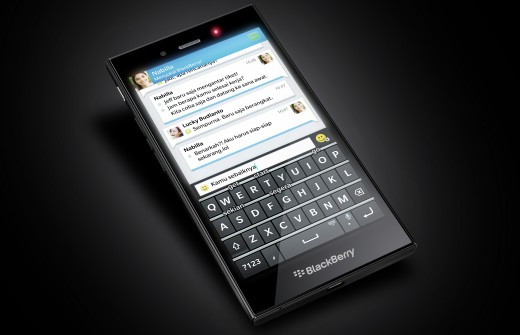 Just last week, at Mobile World Congress in Barcelona, the BlackBerry executive team—including- John Chen, executive chairman and CEO—revealed a host of new mobile solutions that underscore the company’s strength in security as well as productivity, communications, and collaboration.

The new BlackBerry Z3 phone—once codenamed Jakarta, and designed for customers in Indonesia—will offer a large 5” high-definition display and rely on an all-touch interface rather than a keyboard. It will run the latest version of the company’s operating system, BB 10.2.1, and BlackBerry has promised to equip it with a high-capacity battery capable of lasting a long time between charges. More details will be revealed in April when the company officially launches the Z3 at an event in Jakarta.

The Q20, a QWERTY smartphone, will marry old and new: Combining the power of BlackBerry 10 with the classic BlackBerry design, the Q20 will offer an iPhone-like 3.5” touchscreen yet rely on a classic keyboard, track pad, and menu/send/back/end buttons. Though the design may not compel iPhone and Android users to switch to BlackBerry, it will appeal to longtime BlackBerry users who have resisted transitioning to touchscreen-only designs.

Instead of attempting to trump Apple or Android, or convince executives to use its new line of smartphones, BlackBerry is focusing on what has remained its greatest strength: Security.

Based on the COPE (Corporate Owned, Personally Enabled devices) concept—an emerging computing model and major contender to BYOD (Bring Your Own Devices)—BlackBerry will soon launch a multi-platform cloud enterprise mobility management solution in India to enable businesses to secure, manage, and integrate corporate and personal devices.

Protecting intellectual property has become an increasing concern in the age of BYOD. According to a Symantec survey, half of employees who left or lost their jobs in the past 12 months kept confidential corporate data, and 40 percent plan to use it in their new job. COPE devices offer greater control and security to employers while allowing employees to use the device of their choice for professional and personal matters.

We can’t forget the new BBM Protected, the first solution offered in the new eBBM Suite, bringing regulated industries the most secure and reliable real-time mobile messaging in the industry.

With international clients like Airbus, possibly Ford, and the US Government, BlackBerry has the references and name recognition to back up its latest technological turnaround.  Even the President has a BlackBerry. He’d love an iPhone, but he’s not allowed to use one.

What better way to market BlackBerry’s top-of-the-line security functions than that?

Andrea Fisher is a writer and content specialist for Freedom Debt Relief. She has been published in a variety of publications, including the Chicago Tribune and Business Insider. Check out more of her tips on Google+.

One thought on “Is BlackBerry Back?”