From past few years, Exact Match Domains gained traffic with ease not to mention the rankings. Webmasters just opted for an EMD (Exact Match Domain) which had high search volume and gained high rankings almost instantly. The other webmasters were completely furious at their advantage. The reason was that EMD sites were able to focus on competitive anchor text and gain instant ranking. 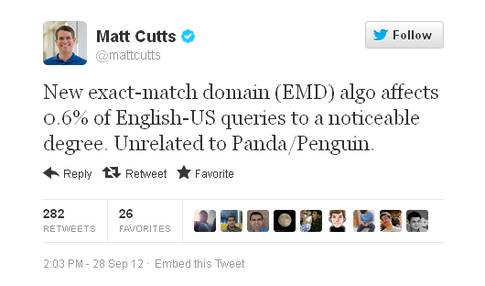 For example, we rank very well for hire wordpress developers but a certain site (EMD), which was recently purchased, is suddenly now our fierce competitor.

Unfortunately, EMD domain has been hit badly with the new EMD update from Google. Matt Cutts announced last week that Google was rolling in an EMD update. It was not sure whether the algorithm change would affect all EMD.

Although it is true that the algorithm update hit EMD sites, most EMD still survive. The reason as to why some were badly hit and why others survive is unclear. For now, the EMD update seems to be a warning to webmasters running behind keyword domains.

A certain friend of mine, who ran an affiliate site raised his concern when his site was hit with the recent update. He relied heavily on guest posts for link building. All the links were of high quality. Rarely were there any links through comments. Upon being hit the ranking were lost completely.

However, most EMD that I had known still rank well. Most of the EMDs, belonging to forex especially, rank the same after algorithm update. In short, niches with less competition still survive. On the other hand, competitive niches (health, fitness, and games) were brought down (regarding EMD).

Should you opt for EMD in future?

Exact Match Domains are a way of funneling in traffic. SEO consultants in the past suggest EMD to everyone irrespective of whether people were trying to build a brand or just gain traffic to earn through ads. However, with this EMD update one thing has been sure that EMDs no longer are an excuse to gain rankings and traffic.

The few EMD that survived mostly are due to the reason that there weren’t competitive with high search volumes and high domain authority. That, however, does not guarantee safety in the future. Therefore, if you are deciding on a purchase on EMD, retrace it. EMD are no longer safe.

The EMD update from Google should be welcomed and I personally appreciate their move. EMD apart from gaining ranks are also a deplorable way of branding in the market. For instance, consider a site name ‘best restaurant in New York’. While adverting would not it, pain to see your brand name as ‘Best Restaurant in New York’. Hope you got the picture.

2 thoughts on “Are Exact Match Domains (EMD) No More?”