The loss of sight can be devastating news. Knowing that in all likelihood you will never be able to see again is an unimaginable thought. 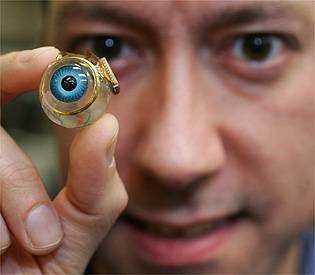 However there has been a significant global research effort to develop bionic implants. One momentous breakthrough as a result of this research has been the development of a portable bionic eye by the German company, Retina Implant AG. Not quite Terminator style, but for two men in the UK, it may have felt like something out of science fiction when they partially had their sight restored.

The patients had been blind for years due to retinal pigmentosa, a condition where the photoreceptor cells at the back of the eye gradually cease to function. However they were able to perceive light and even some shapes following the surgery, where the implant was placed behind the retina.

The implant is wafer thin, a 3mm square microelectronic chip that has 1,500 light-sensitive pixels which take over the function of the photoreceptor cells. When light enters the eye and reaches the chip, it stimulates the pixels which send electronic signals to the optic nerve and from there to the brain. The chip can have its sensitivity altered through an external power unit which connects to the chip via a magnetic disc on the scalp.

The men are part of a clinical trial carried out at the Oxford Eye Hospital and King’s College Hospital in London.

Research scientists at Stanford University in California, may have found a solution to this. They have developed a bionic eye which is powered by light, eliminating the need for complex electronics and an external power source.

The new device, described in the journal Nature Photonics, uses a special pair of glasses to beam near infrared light into the eye, which powers the implant. Natural light is 1,000 times too weak to power the implant.

The researchers said “Because the photovoltaic implant is thin and wireless, the surgical procedure is much simpler than in other retinal prosthetic approaches…Such a fully integrated wireless implant promises the restoration of useful vision to patients blinded by degenerative retinal diseases.”

Though the implant has not yet been tested on people, only rats, this is a significant development as the use of this can be extended to various other devices. Technological advances may even permit this to be used in larger products from printers to televisions.