Well it’s about time too! Our vivid imaginations have taken up cross country on flying apparatus as well as across the universe. George Jetson even simplified the movement of our homes with pullouts, thereby increasing the user size after arrival at the destination. They had phones that talked everywhere and could do anything. 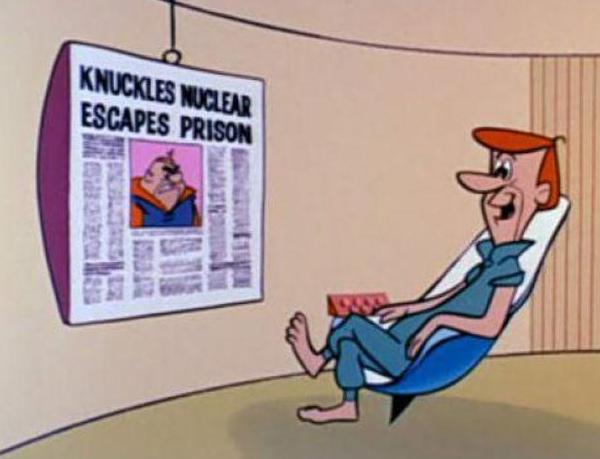 You do remember George don’t you? It was that funny cartoon set in the future, with flying cars and talking dogs. However, if the dog in my home talks, I am moving.

Two days ago, across my Facebook page, came the announcement of the flying car. Poised to be on the market for the 2014 sales year, comes the Terrafugia, or rather that is the name it seems to be given.  Not a bad looking vehicle that may spark a lot of new pilots and nightmares for the FAA.

As stated above, camp trailers took the plunge years ago, and designed the moving home with extra room. They fold into themselves and hide everything when going from destination to destination. Old George would be so proud to see them park, unfold and exude a giant amount of space to roam in. Although they have been around for years, just think, a cartoon had the technology first.

For as long as people have been alive, they needed a way to communicate. Over many centuries so many kinds of technology has made way for the smart phones. Now, we check our email, lock our car doors, turn on the house lights and also open ourselves up for new waves of technology thieves.  Nice Huh? But, if you are careful and keep your smart phones tuned to new technologies to prevent that, they will leave you alone.

Just remember to not Post it on Facebook when you are gone from home, especially if you have a public profile.

One really wonderful thing that came along for rural areas was the satellite dish in the personal size. Most of the mountain areas could not for the life of them acquire television reception without a dish. When that materialized into the internet, Netflix came along, followed by an enormous amount of television by way of ‘live streaming’.  Now the choices are off the hook, and all you have to decide is how much you want to pay each month. Although, if you really are a spend thrift, you can always hook up with YouTube for free and just randomly watch what you want; Hulu, Hulu Plus, Netflix and so many others.

Remember when we were all kids and our dreams made anything possible? We could ride ponies, fly to the stars, dance on the moon. Well, technology is making that more of a reality than a dream, and if you hold on long enough, there’s bound to be some really neat stuff in our future. You might even be one of the inventors and lead us on the adventure. Varooooooom!!