Nokia today announced its first Android running Smartphones | Nokia X and X+, here at Mobile World Congress 2014, Barcelona.  The Smartphones are packed with a 4″ inch LCD display with Nokia and Microsoft apps preloaded. Both Nokia X, and X+ are powered by a 1GHz dual-core Qualcomm Snapdragon 8225-chipset processor with 512 MB of RAM. The Nokia X+ has more storage space & an SD card, as compare to Nokia X. 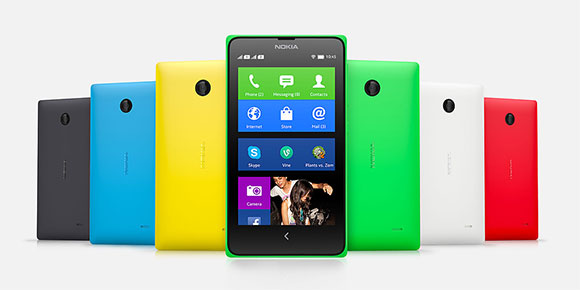 While Nokia X features a 3 MegaPixel Camera, but the phone does not include a flash. Nokia X has a rated battery life of about 10.30 hours talk-time supported by 1,500mAh battery. Storage space for Nokia X is as short as 4 GB, but you have a choice of expanding the storage with a micro SD-card slot up to 32 GB.

The phone also features a assisted GPS and beneath the display, you could navigate the screen with the available Home button that doubles as a Back button. Talking about the phone measurement, it is 10 millimeters thick about 0.39 inch around the middle, weighing 4.5 ounces ( about 128.66 grams ) & measuring 0.4 inches thick. There is also a 2 Megapixel front facing-camera.

Nokia X Operating System Software Platform uses an Android’s open-source code as its base, with popular local-app stores and side loaded applications to customize your phone, in theory.

Apart from this two Smartphones, Nokia also announced a larger version of X device codenamed | Nokia XL. The Nokia X ships with 89 euros in the first week of March, the X+ costs about 99 euros and XL, 109 euros . Nokia will pump the Nokia X and X+ first into Asian countries including India, China, Singapore, Indonesia, & Vietnam, as well as Egypt, Pakistan, Russia, Australia and Poland.

Nokia will compete against low cost Smartphones and even its own low budget Windows phones. But despite being cheap, it could prove to be harder to sell.